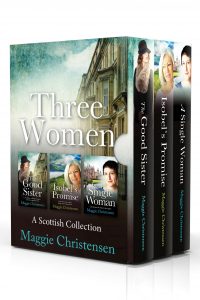 Spanning the years from 1938 to the present day, this family saga follows three generations of women through heartache, hope, and the joy of second chances.

In The Good Sister, when Bel Davison goes to Scotland to visit her elderly aunt, Isobel MacDonald, she learns that the woman had a love affair during World War II. As Bel finds herself drawn to her aunt’s handsome Scottish solicitor, she has to wonder — do second chances really exist?

A beautiful Scottish based wartime saga that fuses the past with the present, through the love stories of two unforgettable women, who are both named Isobel.

Picking up where The Good Sister leaves off, 65-year-old Bel plans to move from Australia to Scotland to be with the man she loves. But when her ex-husband reappears, her life is thrown into to chaos.

Can this midlife couple find happiness in the face of the challenges life has thrown at them?

A Single Woman is the thoughtful and touching story of the developing relationship between two rather damaged people, reuniting readers with the family from the first two books in the collection.

Isla Cameron. headmistress at an elite girl’s school in Glasgow, is determinedly single, adroitly avoiding all attempts at matchmaking by a close friend.

Widower Alasdair MacLeod is grieving for the wife he lost two years earlier, struggling as the single father of two teenagers, and frustrated by the well-meaning interference of his in-laws.

Can Alasdair overcome his natural reserve, and can Isla open her heart to love again?