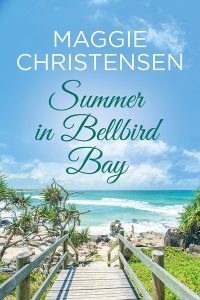 Can Bellbird Bay provide solace to these two broken souls?

When Ailsa McNeil’s marriage falls apart, an invitation to spend the summer with an old friend in Bellbird Bay offers her the opportunity to escape and regroup. What she doesn’t expect is to meet her friend’s twin brother, the first man to stir her feelings when she was an impressionable nineteen-year-old.

As a young man, Martin Cooper couldn’t wait to leave Bellbird Bay. He has spent the past thirty years travelling the world and has accomplished his dream of becoming a celebrated travel photographer. But it has come at a price and, when his career and personal life take a downward turn, he returns to his hometown to consider his future.

When an accident thrusts the two together, their earlier attraction resurfaces. Torn between the desire to protect herself from further hurt and her renewed feelings for the man she’s never forgotten, can Ailsa find happiness again or is it too late?

A heartwarming tale of family, friends, and how a second chance at love can happen when you least expect it.