In The Sand Dollar, Jenny finds a childhood memento – a sand dollar – which precipitates her trip to Oregon. Several people have asked me what a sand dollar is. Hopefully this will help answer that question.

Sand dollars are the skeletons from animals. They are part of the family which includes starfish, sea cucumbers, crinoids, and sea urchins.

Sand dollars are the skeletons from animals. They are part of the family which includes starfish, sea cucumbers, crinoids, and sea urchins. 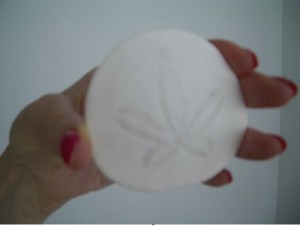 A sand dollar shell looks like a round white coin, which is where it gets its name. When you see one washed up on the beach, it appears to be a round, white circular disk, typically 2.5 cm to 10cm in diameter. These are the internal skeletons of the sea creature. When they’re alive, I understand they’re actually a dark colour, almost purple and are covered with short dark spines that look like fur. These spines can move, and the creature uses them to move around on sea bottom and to push small pieces of food to its mouth. Most sand dollars have a pattern of five sets of pores on them. Those are used to move sea water into the sand dollar’s body, which is then pumped to where it’s needed to aid in movement or other internal functions. Sand dollars like smooth sandy or muddy ocean bottoms. They mainly live in shallow water, near land. Sand dollars will burrow into the soft bottom of the ocean’s shallow water. They will also swallow sand grains to build up their weight so they don’t get washed away!

Those we find on the seashore have lost all of the surface material and have been bleached white by sunlight.

The legend of the Sand dollar
That I would like to tell
Of the birth and death of Jesus Christ
Found in this lowly shell.
If you will examine closely,
You’ll see that you find here
Four nail holes and a fifth one Made by a Roman’s spear.
On one side the Easter Lily,
It’s center is the star
That appeared unto the shepherds
And led them from afar.
The Christmas Poinsettia
Etched on the other side
Reminds us of His birthday,
Our joyous Christmas tide.
Now break the center open
And here you will release
The five white doves awaiting
To spread good will and peace.
This simple little symbol,
Christ left for you and me.
To help to spread His Message
Through all eternity.