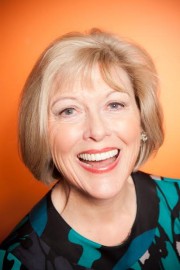 I’m delighted to have you visit Café Cala. I loved reading Who’d Have Thought It? It’s so refreshing to find another author who writes about older women. I’ve been making cranberry and walnut muffins this morning. Would you like tea or coffee with yours?

1 Where did you get the idea for Who’d Have Thought It??

As a health writer and psychotherapist, I’ve done a lot of television in my time, giving relationship advice or commenting on emotional situations, and one morning in 2010 I was asked to go on BBC Breakfast to talk about SWOFTIES. I hadn’t a clue what this meant, but it turned out that the Department for Work and Pensions had given this acronym to Single Women Over Fifty to identify the growing number of mid-life single women who were living for today and not worrying about saving for their old age etc. The Department was quite worried about it! So, I quickly mugged up the subject, and went on TV and discussed it – but on the way home, I realised that this could be a good theme for a novel.

I like tweaking. I like editing. I like fine-tuning.  I feel that, in my case, what first goes down on the page is pretty rubbishy, however I love playing around with words and re-shaping sentences. I also feel quite strongly about getting the rhythm of the text right. And I also enjoy tailoring dialogue so that I use expressions that feel appropriate for each of my characters. This is all very fascinating – if time consuming!  Also, I do enjoy the after-effects of writing a book when readers tell you that they enjoyed it or found it satisfying or ‘could not put it down’. All that is great!

I wrote a lot as a child. And I was an avid reader. But then life took me on a completely different path. But while I was a TV news presenter for Anglia TV, I read in Cosmopolitan that they were running a competition to find the ‘best first novel’. They were very keen on good books at that time. In fact, I went to a brilliant workshop that they held in London with fabulous speakers – including Maya Angelou, Angela Carter and Clare Boylan. Very sad to think that they are all dead now. I got a lot of inspiration from that day and decided to have a go at writing a novel. So I wrote In Honour Bound for the competition, which was actually being judged by the publisher Century Hutchinson. Needless to say, I didn’t win it! I think they were looking for something much more literary. But Century did contact me to say that if I revamped the book a bit, they would publish it. I was beyond happy! After it came out and did reasonably well, I did embark on writing another novel. But at that time I was leaving Anglia, becoming an agony aunt and health writer and later training to be a psychotherapist – and somehow fiction was edged out in favour of writing self-help books. Some 12 of those later, and 29 years after the first novel, I finally returned to fiction.

My husband, Dr David Delvin, whom I married shortly after the first novel was published, has been the biggest influence on my writing. He has mostly written sex and relationship books, and he was also a columnist in various magazines and newspapers when I met him. But whatever he writes, he does so in such a clear, concise and easily assimilated way that I find it really inspiring. Also, very unlike me, his first draft is perfect! So, he has helped me enormously. But I think what also has helped me is my own drive and energy. I can’t claim credit for that – I think I was born with it. But always being ambitious to try the next thing and to see it through is a useful ingredient for a writer.

I am writing another novel – again it’s about people in mid-life. But this time there are five main characters, so it’s quite a lot more complex than Who’d Have Thought It?

The first thing to say is that you just have to get on with it. There are masses of people who claim to have a book in them. But the ones who actually put pen to paper or tap away at a keyboard are really the only ones who can call themselves writers. Dreaming about it doesn’t get it done!

The other factor I think is that you have to find your own method, and your own style. Obviously, if you’re writing fiction it will help you a lot to read a lot of fiction and to train yourself to notice how seasoned authors get their plot across and handle dialogue and so on. But we’ve all read stuff about how you have to start before first light, and work in a shed in the garden, but that may not be your way. Maybe you have kids and you have to fit it in when they’re in bed. You have to bring you, your way of life, your free time, your body rhythms and your own characteristics to the table, as it were. You are not a carbon copy of anyone else. You are you.

I discover new authors all the time – often through the various social media writing groups I belong to. Currently, I’m enjoying Tightrope by an author I’d not encountered before called Simon Mawer. It’s apparently a sequel to another book by him, but it certainly stands alone perfectly well. I adored Clare Mackintosh’s first novel, I Let You Go. And I’ve just bought her second book, which is now out, called I See You. I am expecting great things from that. Also, this year I’ve discovered Jane Davis. I met her through the really brilliant organisation, ALLi. I loved her novel, An Unknown Woman.  And last week I finished Rose Tremain’s The Gustav Sonata, which was a deeply satisfying and lovely book. Other real favourites are: Iris Murdoch, Helen Dunmore, Ian McEwan, John le Carré, Kate Atkinson and Patrick Gale 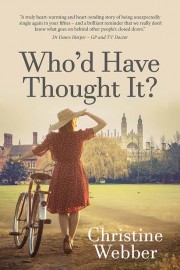 Who’d Have Thought It? is a romantic comedy, though it does tackle some very challenging areas of mid-life – such as secrets that you might uncover about your ageing parents, terminal illness in people close to you, difficulties with adult children going off the rails and so on.

My main character, Annie, is a GP of 55, who is dumped by her husband of 30 years because he’s fallen for a younger woman. But the real action starts a year later when she wakes up feeling better about the situation and decides that – after all – it might be quite fun to be a SWOFTY. However, she quickly realises that being single in your fifties is totally different from being single when you’re young. So it is a book that looks at vibrant mid-life as a single woman – including some fairly disastrous internet dating – but acknowledges just how turbulent and busy that period of our lives can be.

Who’d Have Thought It? is available in paperback at £7.99 and as an ebook at £3.99. It is obviously available from all internet sources, but because it is being distributed by Gardners, it can be ordered