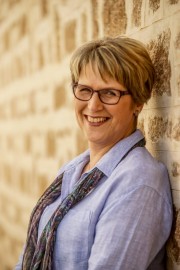 I’m delighted to have you visit Café Cala. I’m looking forward to reading Dust on the Horizon. I’ve been making raspberry and yoghurt muffins this morning. Would you like tea or coffee with yours?

Maggie it’s great to be here and those muffins smell divine. I’d love a long black coffee please with just a drip of milk to make it muddy.

1 Where did you get the idea for Dust on the Horizon?

The idea for this story has developed over many years of visiting the magnificent Flinders Ranges country in the north of South Australia. It’s such a beautiful, rugged, fascinating and demanding landscape I began to wonder how the first European settlers survived there and that sowed the seeds for the story. I had originally intended to begin with this story but went back and wrote the arrival of previous generation in Heart of the Country. Both books standalone but Dust is about the next generation.

Discovering places I’ve never seen and finding out things about my country I didn’t know and then being able to weave them into a story to share with others.

I started writing stories for the children in my class to get an understanding of our local history celebrations. That taught me how little I knew about what it took to be a writer so I did a children’s writing course and I was hooked.

Studying, belonging to writing groups and organisations and fellow writers, so many have been so willing to support and share their knowledge of the industry. I am particularly grateful to Monica McInerney and Fiona McIntosh who were very supportive when I was still trying to find my way.

I am working on Jewel in the North which centres around the third generation of the Baker and Wiltshire families I introduced in Heart of the Country and continued in Dust on the Horizon. It’s wonderful to write about the characters who were only children in the previous book and are now adults making their way in the world. I love still having the older generation in the story as well. It’s like being with good friends.

Write every day. I’ve had to teach myself to write every day. It’s not always the best writing but the words are on the page. You can’t edit a blank page so the trick is to write every day and get the story down, even if it’s only a couple of hundred words you will eventually finish it. Then you can edit. Attend workshops, join a writers’ group, be with other writers. Read for enjoyment but also to learn more about the craft of writing. Write down your writing goals. Be realistic and keep on keeping on.

I read widely across all kinds of genres and naming favourites is very tricky.  I’ll list Monica McInerney, Fiona McIntosh, Bryce Courtney, Rachael Johns, TM Clark, Kate Morton and Tony Park just to get the ball rolling but there are many more.

Dust on the Horizon 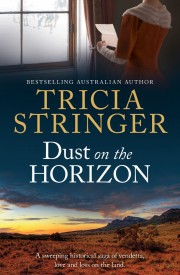 1881  Joseph Baker works hard on his pastoral lease at Smith’s Ridge, in the beautiful but harsh land of the Flinders Ranges. For Joseph this lease, lost to his family in the early days of settlement, offers a future for his young family and that of his Aboriginal friend, the loyal and courageous Binda. Joseph is a clever man, but it is a hard land to work and drought is once more upon the country.

New arrivals to the small rural town of Hawker, Henry Wiltshire and young wife Catherine, open a general store and commission business. Unscrupulous but clever, Henry has plans to prosper from the locals’ fortunes, and quickly makes powerful friends, but when he throws Binda’s family out of his shop, his bigotry makes an immediate enemy of Joseph and a die is cast…

Then the dark force of Jack Aldridge, a man torn between two worlds, crosses their path. Outcast and resentful, he wants what Henry and Joseph have and will stop at nothing to take it.

As the drought widens and the burning heat exhausts the land, Joseph, Henry and Jack’s lives become intertwined in a way that none could have predicted. In their final confrontation not all will survive.

This sweeping historical saga takes us into the beautiful and brutal landscape of the Flinders Ranges and through the gold rush, following the fate of three men and the women they love. Men and women whose lives become intertwined by love and deceit until nature itself takes control and changes their destinies forever.

Available from most book outlets and as an ebook. More details at http://www.harlequinbooks.com.au/product/9781760374235