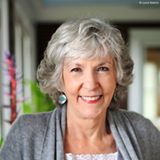 I’m delighted to have you visit Café Cala. I’ve loved all of your books and have them on a special shelf with a space for the final three. I received my copy of X yesterday and can’t put it  down! I especially enjoy the setting as my husband spent his final years of schooling in Santa Barbara and we have visited it (from Australia ) many times.

Tea, thanks. I’m a fan of Earl Grey if I get to choose.

Earl Gray it is.

1 Where did you get the idea for X?

Good question. Once a book is finished, I press ‘cancel/delete’ on the whole process, erasing the work to make room for the next book. (This is metaphorical. I don’t actually delete the work…) In X, I’m actually telling three stories, which I weave together. None are connected except through the character of Kinsey Millhone.

In cruising back through my journals, I realize that I’ve been tracking one of the stories since 1994. This thread is about an elegant woman who hires Kinsey for a job that turns out to be totally bogus. She pays Kinsey with two one-hundred dollar bills that turn out to be hold-overs from an art-theft-for-ransom scheme. I loved the notion, but I couldn’t figure out how to put it to use. Every time I’d begin a new book, I’d be thinking I could find a way to work this idea in. No luck until X.

Another facet of X is the redemption of a hard-luck colleague of Kinsey’s; a private detective named Pete Wolinsky, she’s worked with in the past whose morals she deplores. Pete has been shot to death in W IS FOR WASTED, but I thought it would be interesting to reassess this man’s shady character. Kinsey stumbles across a set of his notes and picks up the last investigation he’s worked on. In the process she realizes she’s misjudged him and she’s forced to make amends.

The third story relates to Kinsey’s personal life; the appearance of new neighbors who turn out to be something other than they first seem.

Realizing that I can survive the process, which always appears to be impossible. As mentioned, I keep a series of journals for each book in the series—a practice I’ve found valuable over the years. In the journals, I spit-ball ideas, record research, ponder characters and storylines, and whine about how scared I am. It amuses me to go back and review my psychological horrors when I’m safely on the other side. Once a book is written, the subject, the structure, and the character development seem inevitable, but as I’m working, the path is fraught with difficulties that always seem to be beyond my poor writing skills. 3 How did you start writing?

My father, C.W. Grafton, was a municipal bond attorney in Louisville Kentucky. His passion was crime novels and he wrote and published three in his lifetime. I grew up in a household where we all read detective fiction and there was much talk about the perils and joys of writing fiction. Without even being quite aware of it, I was picking up life lessons from my father that have served me well over the years. At 18, I began writing terrible poetry and odd short stories. I became hooked on writing, working my way gradually toward the crime fiction my father so admired.

That’s an easy one. I’m currently at work on Y IS FOR… ,which is the next book in what’s known as the alphabet mysteries. After this book, I have one to go and then we’ll see what life brings. I’m hoping to do Kinsey Millhone stand-alones if I have the strength and the mental acuity.

I never talk about a work in progress so the subject and the nature of Y IS FOR… will have to remain a secret. If all goes well, it should be published in the fall of 2017, available through book stores and on-line.

Be patient. Work hard and then work harder. Focus on writing well and quit worrying about agents and editors, publication and money and fame and glory and recognition. When you master your craft, the Universe will open a path for you.

I’m currently enjoying the work of Charles Finch who writes murder mysteries set in London in the mid-1800’s. I read anything and everything, changing up fiction and non-fiction according to whim. 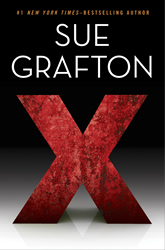 X: The number ten. An unknown quantity. A mistake. A cross. A kiss.
X: The shortest entry in Webster’s Unabridged. Derived from Greek and Latin and commonly found in science, medicine, and religion. The most graphically dramatic letter. Notoriously tricky to pronounce: think xylophone.
X: The twenty-fourth letter in the English alphabet.

Sue Grafton’s X: Perhaps her darkest and most chilling novel, it features a remorseless serial killer who leaves no trace of his crimes. Once again breaking the rules and establishing new paths, Grafton wastes little time identifying this sociopath. The test is whether Kinsey can prove her case against him before she becomes his next victim

To find out more about Sue and where to buy her books: