It’s great to have you visit Café Cala. I’ve been making some strawberry and white chocolate muffins this morning. Would you like tea or coffee with yours?

I usually try to be good and drink green tea during the day but if we’re having muffins, then to heck with it – pass the coffee please!

1 Where did you get the idea for Before Nightfall?

I started off with a very vivid image in my head of a woman with a sack cloth over her head. I knew she was in trouble – I could even sense the material clinging to her face as she breathed – but I had no idea how she got there.
We were on holiday at the time, visiting family and friends in the UK, then having a week in Malta before coming home to Australia, and that scene kept going round and round in my mind. It plagued me for a few days until we went out on a yacht one morning to cruise up the coast of Malta for the day, and while we were relaxing there, I ended up scribbling the whole plot out into my notebook – it was a really fast process.

Meeting such interesting people and helping other writers is the first thing that comes to mind.
I also love the fact that the research I have to do for my books teaches me so many different things. I did an online course with the University of Stirling this year in forensic science and spent six weeks learning about fingerprints, gun residue and blood-spatter patterns!

My mum taught my brother and I to read before we even started school, so I think my love of storytelling came from that. By the time I was about seven years old, I was writing stories and getting my mum to type them up so I could get the teacher to read them out to the class (my handwriting was terrible at the time!).

I have an incredible writing tribe – that’s the family and friends who don’t write, but are always there for me and make me laugh, the readers who post reviews and email or post encouraging words on social media, and the writing buddies who totally understand when I’m frustrated, stuck for advice or just need someone to ask ‘is it like this for you?!’ – I couldn’t do it without them.

I’ve got a political thriller parked at the moment while I’m working on a romantic suspense. I tend to bounce between the two, which sounds like madness but actually works really well because if I can’t make the words flow on one, I go and work on the other.
The idea is to release them both in 2015 so I can then get my head down to research and write the third in the Dan Taylor series of thrillers.
On top of that, I’m targeting the two weeks over Christmas to develop my first screenplay.

Ah, there’s so many! For crime and thrillers, I always read Michael Connelly, Lee Child, Robert Crais, and Daniel Silva. There’s almost a fight in our house every time one of their books is released as to who gets to read it first!
For romantic suspense, I really enjoy books by Helene Young, Linda Howard, and Sandra Brown.
Then there are the authors that I can’t put into specific genres such as Ken Follett and Robert Harris. I’ve also been making an effort to read more by Australian authors this year and that’s opened up a whole plethora of novels! We now use the spare room for the ‘To Be Read’ pile… 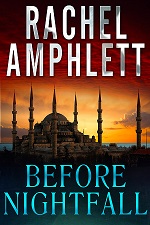 EXCERPT
Kate Foster’s breath escaped her lips in short, shallow bursts.
The sack, which had been placed over her head when she had first been attacked, clung to her mouth and nose with each inhaled gasp.
Condensation prickled against her face, the lack of air suffocating. Her heart beat rapidly, hammering against her ribcage, while a trickle of sweat worked its way between her breasts.
The hard wooden chair pierced the denim fabric of her jeans, and she wriggled backwards, trying to ease the pressure on her pelvic bone.
‘Stay still,’ said a voice to her right.
Her head twitched, and she held her breath, sensing the man as he drew closer. She caught a faint trace of his scent through the musty fabric of the sackcloth – sweat, a hint of hours-old aftershave.
Her heart skipped a beat, and her stomach clenched. The smell grew stronger, and she turned her head from side to side, trying to gauge the man’s exact location. A faint echo of his shower gel lingered in the air between them, a mixture of musk and jasmine.
‘No-one’s coming to get you,’ he murmured in her ear.
Kate jumped in her seat, not realising his proximity had been so close. Her heart raced harder, and she exhaled, trying to keep calm, the rushing sound in her ears now deafening.
A low chuckle vibrated next to her skin. She twisted, trying to gain some distance between them.
She’d lost all sense of time. This morning, she’d been talking to three colleagues outside, taking advantage of the rare sunshine that had bathed the courtyard.
The attack had been swift, well-coordinated, with no warning.
Her jewellery and watch had been removed from her, and then she’d been shoved into a small room with her colleagues, and told to stay silent.
Maybe an hour had passed, during which time her colleagues had been taken one by one from the room, leaving the remaining captives to their own thoughts.
Then, the hostage takers had returned for her, dragging her from the sitting position she’d been forced to adopt, the sack over her head damp with condensation from her breath.
She’d felt a hard surface under her feet, and then a door had slammed shut behind her. She’d been forced into a chair, before her wrists were pushed through plastic cuffs and secured.
Now, her breathing increased as she tried to remember what she’d been told, what to do to keep her captor calm. She worked her wrists, trying to loosen the cuffs and keep the circulation flowing through her fingers.
‘They’ll pay you,’ she whispered, then coughed and cleared her throat before repeating herself. ‘They’ll pay you. To let me go. To keep me safe.’
An exasperated sigh escaped the man’s lips.
Kate held her breath, and then jumped as the sackcloth was ripped off her head. She blinked in the rays of light shining through the grubby farmhouse window.
‘No!’
The voice drew her attention back to the man who was now standing in front of her, hands on hips, glaring.
‘Don’t ever try to bargain with them,’ he said, then turned and strode across the room to a table. He threw the sackcloth onto it and slumped into another chair, facing her, his foot tapping an unknown beat on the floor. ‘You do that, they’re going to feed on your desperation.’
Kate shifted in her seat and watched his heel bounce up and down, and then caught him staring at her. She blushed and lowered her gaze.
The hostage course was so damn hard – only three days to remember everything the instructors were trying to teach her, on top of a bad case of jetlag after her flight from the US two days ago. The difficulty rating went through the ceiling when the taller of the two, now berating her, looked so bloody good in the tight black t-shirt he was wearing with his jeans.
She raised her head and watched the man who was running his hand through his unkempt brown hair, frustration etched across his face.
He appeared to ignore her discomfort. ‘Small steps. Build up a rapport – don’t discuss politics, religion or your own situation. Keep it simple. Ask for small favours.’ His voice rose. ‘And under no circumstances talk about paying a ransom. Ever.’
He rose from the chair and stalked towards her. ‘That’s the hostage negotiator’s job, and you could ruin everything he’s trying to do to save you. Remember the basics we discussed in the classroom yesterday?’
Kate swallowed. She found her concentration wavering as she stared into his green eyes, sure she could see gold flecks around the edge of his irises, and then cursed inwardly as her bottom lip quivered. Although it was a simulated kidnapping, it had been frighteningly real.
Her eyes stung, and she blinked, inhaled deeply and tried to ignore the heat in her face. ‘Can you at least untie me?’
He waited for a heartbeat, and then turned, shaking his head. ‘You sort her out,’ he said over his shoulder and pushed his way through a door which led to the yard outside.
Kate’s mouth dropped open in indignation, before her attention was drawn to another, older man approaching her.
He reached into the back pocket of his jeans, pulled out a knife and bent down. He flicked the blade open. As he raised the blade, he glanced up, his grey eyes twinkling with humour.
‘Ignore Finn,’ he said. ‘He’s having a bad day.’
A faint smile stole across Kate’s face, and she sniffed. ‘Really, Steve? What’s he like on a good day?’