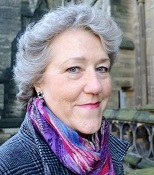 It’s great to have you visit Café Cala. I loved Stargazing and can’t wait to read Cauldstane. I’ve been making my granny’s shortbread recipe this morning. Would you like tea or coffee with yours?

I’ll have coffee with my shortbread please!

1 Where did you get the idea for Cauldstane?

I first got the idea when I visited Cawdor Castle, near Inverness. It’s privately owned, but open to the public and it’s still inhabited. I started thinking about what it must be like to live in a castle and of course, I wondered if it was haunted. Once I’d had the idea of writing about a family struggling to hold on to their ancestral home, I visited a lot of other castles as research. (I live in the Highlands, so I was well placed to do that.)
But CAULDSTANE is also a book born of life-threatening illness. It’s a rattling yarn, but it’s also my artistic response to the experience of breast cancer in 2012. I went from diagnosis to mastectomy in less than 3 weeks. I had a very bad time with chemotherapy which, as I write, has left me semi-disabled. Cancer was the biggest thing in my life for almost a year, then fear (of more chemo, worse disability and death) became the biggest thing in my life – until I started writing CAULDSTANE. Working on a new novel gave me a sense of my old self and the nature of the story gave me a channel for examining and expressing my fears.
I went public about my cancer on my Facebook author page and many people suggested I should write about my experience, but my attitude was, it was bad enough living it – why would I want to write about it? Nevertheless my experience was so physically and emotionally traumatic, I felt I had to find a way to assimilate it and conquer it. So I decided to write a novel about my experience, but not describing it.
But you don’t need to know any of this to enjoy CAULDSTANE, which is a cross between a supernatural thriller and a modern fairy tale. Cauldstane is a decaying 16th century castle in the Highlands where the MacNab family live and it’s a money pit. It’s been the home of the asset-rich, cash-poor MacNabs for generations, but in the 21st century they’re finding it hard to hold on. The family is divided as to whether they should sell up or try to use the castle and estate as the basis of a business.
Cauldstane is blessed with quirky architecture, red kites and a riverside location, but there’s also an ancient MacNab curse and a malevolent ghost who poisons lives and relationships and wants to drive the family out. But the real damage is caused by fear – fear of what might happen and, as one of the characters says, “If you live in fear, you fear to live”. Fear is a kind of wasting disease that affects each of the MacNabs in different ways. (No prizes for guessing that the ghost is how I personified cancer.)

Without a doubt, getting in touch with readers has been the greatest pleasure and reward. I was first published in 2005, but I’m still thrilled to bits when a reader gets in touch or takes the trouble to post a thoughtful review. Over the years I’ve responded to and often corresponded with readers, some of whom have become friends.
I love my job and I would write even if no one wanted to read my stories, but the enthusiasm of my readers has given me a massive confidence boost. It seems little short of miraculous to me that such personal and quirky novels should speak to so many different people.

I was an over-worked teacher in a very tough school and I cracked up in my 40s. While I was recuperating from a breakdown, I started writing fiction for my own entertainment. I joined an online writing group and members suggested I should try to get an agent for my first novel.
I found an agent who loved my work, but I found my own publisher when I was lucky enough to meet an editor at a writing conference who was looking for manuscripts featuring older women. The romantic heroine of my first novel, EMOTIONAL GEOLOGY was 47, so I told her about the book. She asked to read it and then she decided she wanted to publish it. I was just in the right place at the right time!

As a writer? Analytical reading. I was a critical reader long before I was a writer and I think it’s important to make time for reading if you’re a writer. I don’t think it matters what you read – you can learn a lot from bad writing! Watching movies has also helped me understand how stories are constructed.
Another thing that’s helped me is a determination to say what I want to say, in the way I want to say it. That led to parting company with my publisher because I wouldn’t re-write HOUSE OF SILENCE as a romance, but by writing just for myself, I avoid being unduly influenced by commercial factors – sales figures, Amazon rankings and reviews, the latest trends in publishing. I just tell the story I want to tell and hope readers will like it. It’s nice if they do, but it’s not the end of the world if they don’t. I consider A LIFETIME BURNING to be my best book, but it’s my least popular. That doesn’t really bother me. I started writing it, my second novel, without any expectation of it ever being published.
Fundamentally, I write for myself and I think that might have contributed to my success. I’ve developed an individual “voice”, I believe passionately in what I do and in the quality of my “product”.

5 What advice would you offer aspiring writers?

Write for writing’s sake. Don’t expect publication or financial reward – you are very unlikely to get either. Writing is its own reward anyway. When you feel angry about your unsolicited manuscript being rejected, remember: nobody asked you to submit it!
If you’re thinking of going indie, write the best book you possibly can and make sure it’s properly edited. Ideally, wait until you have several books ready to e-publish. It’s hard to make an impact with just one.
I would also recommend that any would-be indie author joins the international professional body, The Alliance of Independent Authors. https://allianceindependentauthors.org/ They offer advice and support. Their closed Facebook group is a mine of information, generously shared.

6 Which authors do you enjoy reading? 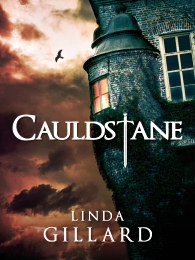 Synopsis of CAULDSTANE
When ghostwriter Jenny Ryan is summoned to the Scottish Highlands by Sholto MacNab – retired adventurer and Laird of Cauldstane Castle – she’s prepared for travellers’ tales, but not the MacNabs’ violent and tragic history.
Lust, betrayal and murder have blighted family fortunes for generations, together with an ancient curse. As the MacNabs confide their sins and their secrets, Jenny learns why Cauldstane’s uncertain future divides father and sons.
But someone resents Jenny’s presence. Someone thinks she’s getting too close to Alec MacNab – swordsmith, widower and heir to Cauldstane. Someone who will stop at nothing until Jenny has been driven away. Or driven mad.
“Hell hath no fury like a woman scorned.” Especially a dead woman.
~~~
Excerpt from Chapter 6:
One day Sholto and I were sitting on a bench in the walled garden, sheltered from a cool autumnal breeze. He preferred to be outdoors whenever possible and liked to walk while talking, but he often needed to resort to one of the many strategically-placed benches in the grounds. The tools of my trade were just a small dictaphone and a notebook in which I would record questions that occurred to me while Sholto talked, so we could work anywhere. Today he’d chosen a favourite spot on a south-facing wall and as we rested, I could feel the warmth radiating from the stones behind me. I was enjoying the play of sunlight on the last of the roses and the fluttering dance of Painted Ladies on a white buddleia when Sholto said, ‘Our family’s cursed, of course.’ He saw my look of astonishment and treated me to one of his roguish smiles. ‘All good Scots families are.’
‘Cursed?’
‘Oh, yes. There’s a MacNab curse. Hundreds of years old. As old as the castle. Older possibly.’
‘Do people believe in it?’
‘It’s quite hard not to.’
‘Why?’
‘Our women keep dying.’