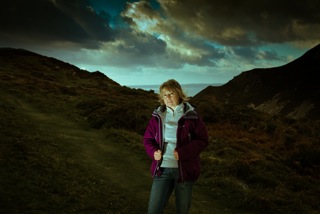 I loved White Horizon and am looking forward to reading more of your books. I’ve been making some Welsh cakes in your honour this morning. Would you like tea or coffee with yours?

Bore Da! (Good morning in Welsh) Thank you for having me and I’d love Welsh cakes with my coffee, how can I refuse? I’m so pleased you enjoyed WHITE HORIZON. All my books are set very locally and this one, centred around Lake Crafnant was no exception 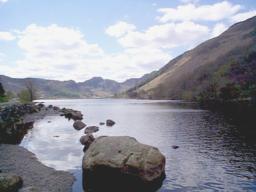 1 Where did you get the idea for White Horizon?

The location re WHITE HORIZON is certainly both romantic, and dramatic. Crafnant, is far more accessible than it looks in the pictures. I say accessible, but to be fair the single track road is not built for the modern car, and if someone needs to pass, don’t look down. Llyn Crafnant is a 3/4 mile-long lake (well, reservoir actually) that lies in a beautiful valley where the northern edge of Gwydyr Forest meets the lower slopes of the Carneddau mountains and, more specifically, the ridge of Cefn Cyfarwydd. The head of the lake offers what could be regarded as one of the finest views, across the lake to the mountains above, in North Wales. Crafnant takes its name from “craf”, an old Welsh word for garlic, and “nant”, a stream or valley. Even today the valley of Afon Crafnant smells of wild garlic when it flowers.

It’s a popular location for a Sunday stroll, a family walk on mostly level paths and the whole circuit only takes 40-60 minutes depending on your pace. There’s a tea shop selling Welsh ice cream on the left bank and in bad weather the mountain ponies come down to graze, often with young at foot. On one such amble, I said to husband, wouldn’t this make a great location for a hotel? Maybe with a huge decked area jutting over the head of the lake. What a wonderful vista to have a restaurant overlooking the water, imagine the sunsets! Oh, the romance of it all.
‘Why don’t you use it for a book location? Then you can build a hotel in your head,’ he said. Our imagination ran riot, well, mostly mine, although we soon became bored with just the hotel and began to spice it up, adding a character hell-bent on destruction, manslaughter, domestic violence and eventually, running out of sensible plans, we set it all on fire! What a story… we turned a pleasant picnic area into a scene of death and devastation! (I’ll have to keep my eye on that idea of his though, the one about building things in my imagination. I can see how it might become used and abused beyond its original motive).
But, I did keep the fire, the manslaughter and the domestic violence. But it is romantic as well, trust me.
PS: If you like the sound of all this drama, I’m currently promoting this book at the special price of 99c/77p
Sounds like a beautiful spot. I’m ashamed to say that, although I grew up in Scotland, I’ve never been to Wales – was too intent on going to the Continent in my teens and early twenties, then I came to Australia!

The most rewarding aspect of writing fiction has to be the connection with the reader. When someone across the world can connect with your story and is entertained by it enough to write a review or to come and say thank you, I really enjoyed reading it, it’s a job well done and the ultimate satisfaction.

The most rewarding aspect of writing fiction has to be the connection with the reader. When someone across the world can connect with your story and is entertained by it enough to write a review or to come and say thank you, I really enjoyed reading it, it’s a job well done and the ultimate satisfaction.

What has helped me most? Learning to accept criticism, because although passion is vital, writing well is a craft which has to be learnt. Connecting with the right people who can nurture this skill in you will differ for each individual.

I’m working on a part two to WILD WATER. This was my first title. Looking back now, it isn’t my best writing from a technical point of view but the characters have been so popular and there was so much in the story left to give. It was easy to fall back into their world. It’s been my popular book, which proves that character and story comes first.

Advice to aspiring writers? Read a lot! And practise, practise. Writing groups, reading groups. If you choose to go the self-published route, you WILL need an editor. Trust me, this is a different skill. 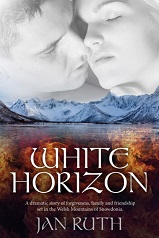 Victoria told herself she wasn’t remotely interested in Daniel and Tina’s wedding. Even so, she found herself drawn to the article in the local press with a slightly cynical smile. The smile was down to an old blurry photograph of the happy couple, speeding across the local school field on a motorbike, and just out of shot, an enraged headmaster.
The Welsh Coast Weekly made their subsequent life story sound like a low budget film. There was mention of some kind of controversial inheritance, how it had sealed their fate to return to their home town after some twenty years, to be married in the local church. Given their Bonnie and Clyde style status at school, Victoria had always imagined they would get hitched somewhere like Las Vegas, or John o’ Groats. Oh, and his proposal was the result of a drunken pact! Great basis for a marriage! But who was she to judge. She’d married Max, and a fine upstanding pillar of society he’d turned out to be.
She shivered involuntarily at the thought of Max. How weird that the sensation of fear in her gut was physically almost the same as sexual anticipation. The idea of that, the sudden connection of it, both frightened and revolted Victoria, but she expertly pushed it to one side and crossed to the French windows to stare at the delicately frosted garden. The ancient trees and the stark vision of Aphrodite holding out her hands to catch the winter sun, filled her with calm. After all, the statue represented the goddess of love, despite the frozen tendrils of ivy clutching her stone heart.