It’s great to have you visit Café Cala again with your new series. What a fabulous cover! I’ve been making some raspberry and apple muffins this morning. Would you like tea or coffee with yours?

Oh yum, that sounds delicious! May I have some Earl Grey with that, please?

1 Where did you get the idea for Love Will Find You?

We went to Merimbula a few years back, and I knew straight away that I wanted to write something set in a small place like this. It was round about the time of the AFL Grand Final – put one and one together and the idea for LWFY was born.

Feedback from the readers – my daughter actually has recently read one of my books and loved it. That gave me a bit of a thrill, too J

Coincidence basically – I was bored, nothing on telly, kids in bed… I put a few words together. A friend had a read through it and gave me some hints. This is how “Sweet Dreams, Miss England” was born. Initially only for family and friends, it took off… now I’m really happy to have found my creative outlet.

I’m learning from book to book. I’ve been lucky to have worked with some really good and nice editors. Compromising on issues and accepting change – initially hard for me, but I’m getting much better.

I’ve just finished book #2 in the Australian Sports Stars series “Let Me Love You”, and I’m about to get started on book #3.

Having said that, we’ve just returned from our holiday in Tumby Bay, which screams to be in one of my books as well. Yes, the first few pages have been written, and I love the characters already.

Never, ever give up, and if someone doesn’t like your story – so what, it’s ONE opinion. Your time to shine will come.

Still enjoying Lee Child and Jill Shalvis. I recently read a book by Robyn Carr from the Thunder Point series… I really enjoyed it! 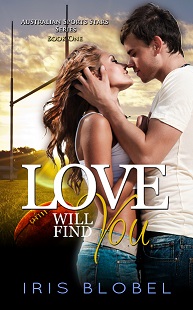 Tyson held the Brownlow Medal in his hand, but celebrating was the last thing on his mind. His fake smile was as much a lie as the last message he’d sent to Katie the day before. As a result, it was his mother who sat in the crowd amongst his teammates, his friends, the footy world, reporters, and whoever else was important—and not Katie. His gaze wandered around the ballroom, with all the round tables neatly positioned in nice rows. Each table was beautifully set with dinnerware, menus, and a floral arrangement. The TV screens on either side of him showed a close-up of the stage, and as he tried to protect his eyes against the bright lights, he watched them all, making toasts, their glasses filled with the best champagne, applauding his achievement.

The crowd settled and awaited a speech. His speech. Nervousness crept up in him as he stared into the audience. His throat burned as the acid in his stomach churned.

The Brownlow Medal was awarded to the best and fairest football player of the season, yet he didn’t think there was anything fair about the way he’d treated his girl.

Tyson Gaspaldi took a deep breath, unfolded his little note, and cleared his throat. The first word he focused on was her name, Katie. He blinked to refocus and thanked his mother as well as his family. It came effortlessly once he was past the initial hurdle and in only a few minutes he finished, held up his medal, and walked behind the stage.

Why had he said the things he had? Why didn’t he just answer her question?

A short time later, Tyson joined his friends and his mother at the table again.

“Congratulations, darling.” His mother took his face into her hands and gave Ty a kiss on his cheek. Only a few years ago, he would have been embarrassed by such open emotions in front of a crowd, but since his father’s death earlier in the year, he welcomed every sign of affection by his mother.

“Dad would be so proud of you.” Caroline Gaspaldi took a step back and gazed at him. Pride radiated from her eyes. “Look at you. You should wear a suit more often.”

His friends around the table gave him a quick clap on the shoulder and congratulated him before sitting down to proceed with the evening. Ty noticed his phone buzzing and with a flick of his finger, he scrolled down his messages. He stopped at Katie’s message from earlier in the day.

I don’t believe u!

With a heavy sigh, he switched off the screen, ignoring all the other new messages and the phone into his pocket. He took the beer in front of him and tried to concentrate on what the guy on stage was saying. Out of the corner of his eye, he spotted a woman at the other table. She looked incredible in her shimmering silver evening gown. The décolleté of her dress revealed tanned skin upon which a delicate necklace hung. Her curly brown hair was pinned up in a ponytail which made her look very sexy. When she smiled at him, he winked at her in return.

“What are you doing, Ty?” his mother whispered into his ear.

Where to Find Iris: