This morning I’m delighted to welcome Claire  Baldry to Cafe Cala. I first met Claire when she set  up her facebook page and website Books for Older Readers, a wonderful initiative to collect those books which, as the name suggests, would appeal to older readers. You can access the Facebook page here and the website here.

Claire is offering a giveaway of a signed copy of her book Different Genes – to be in the draw all you need to do is sign up for her newsletter here. 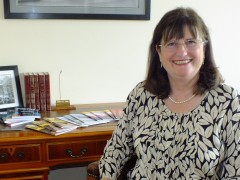 Welcome to Café Cala, Claire. I loved reading Different Genes and the fact that, like me, you choose to write about mature characters. First let me congratulate you on your push to promote writing for Older Readers through your website and facebook page

Thank you, Maggie. I was delighted when you invited me to be interviewed in your Café Cala series.

This was my first novel and I wanted to write about something familiar. It just made sense to create main characters of a similar age to myself. It was only when I started marketing the book that I realized there wasn’t really an established genre where books with romantic interest between older characters would fit. After discussing this with other authors, I started the Facebook group and website ‘Books for Older Readers’.

Like me, you began to focus on your writing when you retired. Was it something you always wanted to do?

When I was a teacher, I used to write plays and songs for the children I taught, and I’ve always written poems for family celebrations. However, I never really perceived myself as a writer. My husband has Type 1 Diabetes, and shortly after I retired, he became very poorly for several months. It wasn’t possible to leave him alone, so for the first time in my life I found myself at home with time on my hands. I began to write (mostly) lighthearted poetry, and I just couldn’t stop. Within a year I had published two booklets of poetry and begun to establish myself on the speaker circuit as a performance poet. I donated the fees to Diabetes UK.

What moved you to make the transition from poetry to writing fiction?  Writing and performing poetry is still a big part of my life. However, after four years, I wanted to challenge myself with something different. I wrote 50,000 words in National Novel Writing month in November 2016, and that formed the basis for my debut novel ‘Different Genes’. I found the whole process very liberating. When I write poetry, I tend to repeatedly edit as I write. With the novel, I produced great chunks of text, before going back to edit. It was much easier to become immersed in the plot and characters.

You write from both the male and female point of view. Do you find it easier to write one or the other? I thought I would find it harder to write from a male point of view, but I rather enjoyed it. The differences between the way men and women perceive themselves and the world has always fascinated me. I think writing from both points of view has contributed to my own understanding and emotional development.

You write about the discovery in later years of adoption. Is this an issue close to your heart? Not especially, but having worked in education for so many years, I have watched the way parenting and heritage impact on children’s self esteem and development. Shortly before I started ‘Different Genes’ I heard a radio interview with a woman who only discovered she was adopted when she was in her sixties. She was very angry, because her heath records and treatment had taken account of her adopted mother’s medical history. I wondered a lot about the adopted mother’s motivation for keeping the adoption secret, and wanted to try and unpack the possibilities when I wrote my novel

How heavily do you draw on your own experiences in your writing?

Massively, I think I do. I feel most comfortable writing about what I know or the experiences of people close to me. I have visited all the places in my book, and lived through most of the eras. The main female character, Louise, was born in the same year as me.

Which authors do you enjoy reading??

I love the romantic classics authors such as Charlotte Bronte and George Elliot. I also particularly enjoy Joanna Trollope and Anita Shreve. Working on the ‘Books for Older Readers’ website has motivated me to read much more widely, and I have discovered many new and exciting authors, including you, Maggie.

Undoubtedly, Jane Austen. The poet in me loves the way her stories are so finely crafted and structured. Also, strangely, Jilly Cooper, because I admire the way she weaves humour throughout her books. If only I could write half as well as either of them!

Yes and no. When I wrote ‘Different Genes’ I had a pretty good idea of what the plot would look like, but once I started writing, the storyline began to take on a life of its own and turned in directions I had not intended. Exactly the same thing happens when I write my longer narrative poems. Once the characters start to feel ‘real’, they take charge of the plot.

With poetry I have to wait for inspiration and write wherever and whenever it comes. I always keep pens and paper with me. Writing a novel requires substantial and prolonged amounts of time which I actually timetable for myself. I will often get up very early and write until breakfast. However, my main writing time is during the afternoon when my husband sleeps.

I love it when a new idea becomes real and I can write great wads of text, especially if I can produce some humour or edgy emotion. I really enjoyed writing the later chapter in ‘Different Genes’ with Ruby in the care home. I would like to say more, but it would give the plot away. As regards the thing I most dislike, it has to be the final stages of editing. You think you’ve got it right and then you notice an error. You have to plough through the whole book to see if recurs elsewhere.

My fifth poetry booklet called ‘Simply Modern Life’ is almost ready for publication, and I am working with a brilliant young illustrator to bring the poems alive. I also have two novels in embryo stages, ‘Ladies Who Swim’ and ‘My Daughter’s Wedding’. The latter is about all those family relationships which make life a challenge in the run up to a wedding. It will also include a bit of a quirky mystery, similar to the one in ‘Different Genes’. As my own daughter is getting married this Summer, I suspect that the wedding novel will really get going in the Autumn.  I am very involved in my local community and time (or lack of it) can be a bit of an issue, but I will manage somehow!

Different Genes is an enthralling tale of love at an older age combined with the challenge of discovering a secret about the heroine’s birth. Baldry’s characters are well drawn and synpathetic, and the plot believable, making this a delightful read. 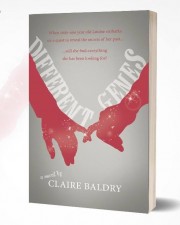 Sixty-one year old Louise finaly learns she is adopted after the death of her mother. She embarks on a quest to reveal the secrets of her past, helped by new companion and lover, Simon, whom she meets after joining an Internet dating site.

In her first full-length novel, author Claire Baldry sensitively explores the growing closeness between the newly retired couple as they develop their mutual understanding and physical relationship.

The reader is reminded of the changing values of the postwar years, while Simon and Louise visit places from Louise’s past and meet people who knew her mother and grandmother. Together, they begin to unlock the forgotten secrets of Louise’s past – but in the face of so much change and uncertainty, can Louise let her relationship flourish?

The story is set mainly in the author’s home county of East Sussex, but finishes in Kent, when Louise and Simon finally visit her birth mother’s grave at a convent in Chatham. This immensely readable journey of discovery is a charming and bittersweet mixture of romance, sadness and genuine suspense.

You can buy it here

You can fiind Claire at