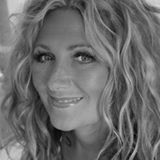 I’m delighted to have you visit Café Cala. I’ve recently discovered your books and love your writing. I’m looking forward to this next one. I’ve been making a raspberry and yoghurt loaf this morning. Would you like tea or coffee with yours?

1 Where did you get the idea for My Husband’s Wife?

The seaside town of Woolacombe, where the My Husband’s Wife is set, has a special place in my heart.  My parents who are now in their seventies, spent their very first holiday there by the sea in the nineteen sixties and it was an epic journey from London in those days by all accounts.

It was while we were visiting for a week in the summer of 2015, sitting on the sand by day, strolling the town by night and wandering the coastal paths before stopping for fish and chips to be eaten al fresco, that I felt compelled to write about the magical place where the views and the sunsets rival any in the world!

I was sitting alone on a bench up on the Esplanade, watching the surfers claim the last of the day as their own, bobbing about on the waves like slick, black, inquisitive seals that I reflected on the glorious day we had spent.  I felt a surge of happiness, recalling the simple joy I had felt to be laughing and happy in the sunshine with those I love.

I started to think about what was important in my life and it was very simple, my family, my children, my friends; these are the things I hold dear, the things that make me happy.  Then I started to wonder, what it would feel like if I were to lose one of these things, or worse still, lose them all…  My mind began to whirr, as it often does and ‘My Husband’s Wife’ was born.  I placed my hand on the worn slats of the bench I was sitting on and imagined being Rosie Tipcott, coming up here for a chat to the world and a good old think during good times and bad.

I receive a LOT of messages via Social Media from ordinary women like me who have found their lives turned upside down one of the issues that are covered in my novels.  The best bit of my job is hearing from readers how my stories have helped them deal with their own real life problems as a result, or that they realise while they may not be fantastically rich, that they do have a lot to be thankful for in their own lives.

One of my novels ‘Three and a Half Heartbeats’ is a story about a condition called Sepsis (formerly referred to as Septicaemia) which is one of those diseases which kills thousands of people every year, but is perfectly treatable if detected early enough (like Meningitis).  Some readers have written to me to tell me that having read the book, they learned the symptoms and recognised them in loved ones, voiced their suspicions to medical staff and having been correct, saved the lives of family members.  Those were very special letters.

I also think that sometimes it might to be difficult to talk about how you feel about a situation, so I choose gritty, relatable topics that a lot of people find difficult to talk about and the write a book that explores an extreme case of it using an unlikely heroine and how she reacts to the challenges that she confronts.  All of my stories are uplifting, no matter how tough the subject matter and I think that this makes it somehow easier to talk about the issue with your friends and to realise that we all share the same fears, hopes and dreams.

I read English at University many years ago and always wanted to be an author but although I had always written for my own pleasure, didn’t have the confidence to put my work out there for criticism.  Then my husband who is a soldier returned from being away on an active duty deployment and was complaining about a book that he had read that hadn’t matched up to his expectations, he encouraged me to write my first novel ‘Poppy Day’ based on what it felt like for me to be a military wife while he was away and what it felt like.

I chose an extreme angle for the story – my nightmare would be what it would be like if the man I loved was taken hostage, so I wrote the story about that and after a long hard struggle to get it published, it went on to be a cult bestseller.  After I appeared on a lot of popular TV shows in the UK talking about it I was fortunate enough to be offered a global publishing deal and now I’m working on my fifteenth novel.

I am fortunate in that I have had a lot of different jobs where I have met thousands of people, all of which can contribute to my list of characters!.  I’ve worked as a cleaner, a management consultant and everything in between; I’m a mum, a cancer survivor and I’ve known what is feels like to lose close family members so I have a lot of human experience and emotion to draw on which I think has helped me to makes my books realistic and believable.

I’ve just finished a book called ‘The Food of Love’ about a happy couple with two lovely daughters who have a pretty perfect life.  Then suddenly they realise that one of their girls in her teens has a problem; she has an eating disorder that she has been hiding for some time.  Caught in the grip of Anorexia, the family have their work cut out trying to save their precious daughter, a difficult task as the condition is not widely understood and the cure, eating, is the very thing that the sufferer will go to any lengths to avoid.

It is an uplifting read despite the deadly serious subject matter and it raises awareness of a condition that increasing numbers of young women (and men to some extent) are falling prey to, in order to conform to social pressure.

Just do it.  Just start writing.  It doesn’t matter if it is in the middle of your story or near the end, just put pen to paper and start the process.  Don’t be too critical early on either – you might go back and change the whole thing, but get a decent amount of text down first and see where it takes you – you never know, it might be pretty good at the first draft if you give yourself a chance…

I am probably the most prolific writer in the UK today and the problem that comes with that is that it eats into my reading time.  I love the classics like Thomas Hardy and could re-read those at any time and am a big fan of Jodi Piquolt, which I think comes through in my work.  I also love novels like ‘The Book Thief’ by Marcus Zusak and  ‘The Time Traveller’s Wife’ by Audrey Niffenegger. 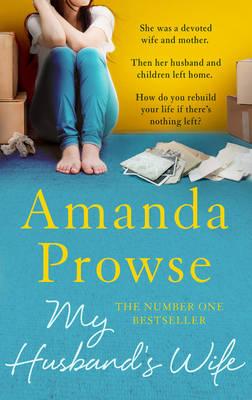 Once a week, Rosie Tipcott counts her blessings.

She goes to sit on her favourite bench on the north Devon cliffs, and thanks her lucky stars for her wonderful husband, her mischievous young daughters, and her neat little house by the sea. She vows to dedicate every waking hour to making her family happy.

But then her husband unexpectedly leaves her for another woman and takes the children. Now she must ask the question: what is left in her life? Can Rosie find the strength to rebuild herself? More importantly, does she even want to?

What people are saying about MY HUSBAND’S WIFE:

‘My Husband’s Wife is a gripping book that kept me glued to my seatfrom the start, I couldn’t put it down … Another brilliant Amanda Prowse story.’

‘Her writing will make you laugh, cry, shout and scream and you will be left more often than not an emotional wreck but yet deeply satisfied that you have read such an outstanding book.’

‘My Husband’s Wife was utterly captivating and brilliant!.

‘My Husband’s Wife is emotional, amusing, heart-warming and entertaining … It is another Amanda Prowse triumph.’

‘Absolute gem of a book’

‘Nobody, and I mean NOBODY, does domestic drama like Amanda Prowse.‘

Amanda Prowse is the bestselling author of contemporary family fiction and has written twelve books and six novellas that have been translated into dozens of languages all around the world.

Her titles include ‘What Have I Done?’ which was voted an Amazon Kindle editor’s book of 2013 and ‘A Mother’s Story’ that received the accolade of being the best family fiction novel by the Daily Mail. It also won the coveted Sainsbury’s eBook of the Year 2015.

Her summer book of last year ‘Perfect Daughter’ earned a place in the Amazon hall of fame and was also selected as a prestigious World Book Night title 2016 by The Reading Agency who promote and manage the nation’s libraries.

Amanda is a regular panellist on the popular daytime TV show ‘The Wright Stuff’ and co-hosts the BBC Radio book club in Bristol in addition to narrating most of her own audio books. Amanda lives with her husband and two sons in the West Country, where she writes full-time.